GridWise understands that a variety of market forces are rapidly changing the industry.

We anticipate the impact these forces have on the grid and identify policies and practices that ensure continued optimal grid performance. We also provide innovative strategies for increasing the speed and scale of change.

GridWise has been the leading change agent for the industry since 2003; driving significant policy changes such as:

In 2007, GridWise led a coalition to develop the basis for legislation that became the “Smart Grid” Title (i.e., Title XIII) of the Energy Independence and Security Act (EISA). The provisions of this Title provide many of the fundamentals for rapid changes that followed throughout the industry. It contains a robust definition of grid modernization as well as the basis for numerous demonstration projects and investment grants that subsequently were funded through the American Recovery and Reinvestment Act (ARRA) of 2009, which accelerated further changes to the industry.

In 2009, GridWise played a key role in ensuring that the aforementioned “smart grid” demonstration projects and investment grants (authorized in the “Smart Grid” Title of EISA 2007) were included as a major element of the 2009 “Stimulus” package. These projects leveraged $10 billion of private sector investments and were critical to accelerating broad deployments of innovative, cost-effective grid modernization technologies and capabilities across the U.S. and for proving the benefits of large-scale smart grid deployments to the reliability, resilience, security, and flexibility of the electric system.

GridWise has worked for many years to educate federal and state decision makers on the importance to the electric system, grid operators, and consumers of grid modernization technologies, capabilities, and their benefits. A bipartisan, active U.S. House of Representatives’ Grid Innovation Caucus was formed nearly five years ago, with strong support from GridWise, and from the Edison Electric Institute (EEI) and National Electrical Manufacturers Association (NEMA), to further educate Congress Members and Staff on critical grid modernization issues.

In 2004, GridWise signed a formal Memorandum of Understanding with the U.S Department of Energy’s Office of Electricity (OE). Updated and renewed in 2016, this MOU has served as the basis for a variety of efforts led by GridWise in conjunction with OE. In 2014 a report titled “The Future of the Grid: Evolving to Meet America’s Needs” was published to summarize a 2-year collaborative effort with OE to engage broad industry views on the importance of modernizing the grid. The recommendations of this report served to support expanded federal funding for relevant R&D while also providing input and guidelines for ongoing stakeholder efforts. 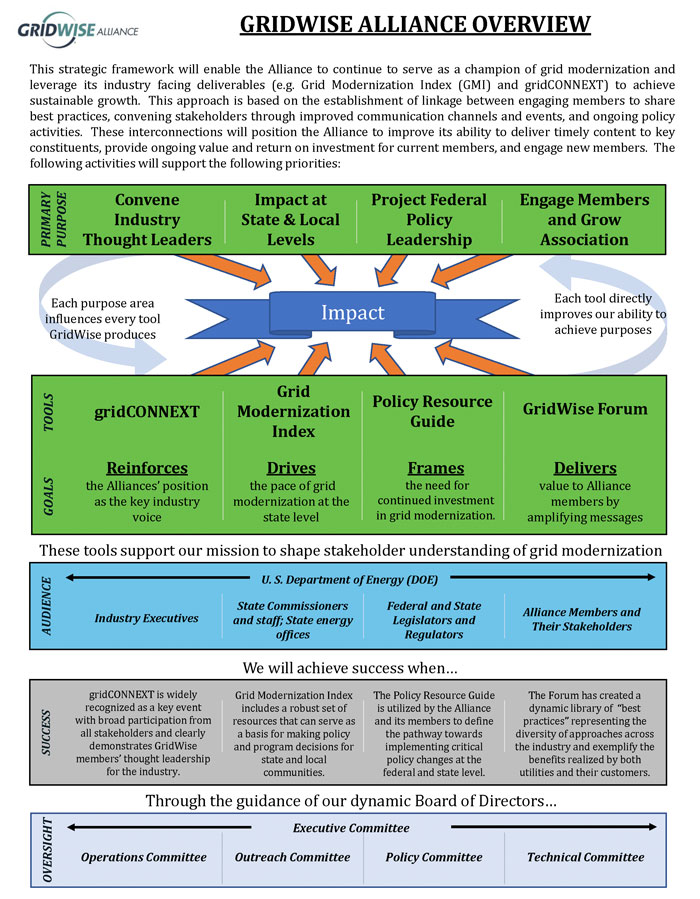